COA/CAP/ADID Win Project of Significance Award from ITS

The Intelligent Transportation Society of Georgia announced the Best of ITS Award winners and the Shackelford Scholar at the 2013 Annual Meeting and Exposition at the Lodge and Spa at Callaway Gardens.

"I want to congratulate our best of ITS awards winners, as they represent the best people and projects in Georgia and the nation," said Scott Mohler, President of ITS Georgia. "Special recognition is in order for Susie Dunn and Marion Waters who are founding members of ITS Georgia and have given tirelessly of their time and provided excellent leadership for the organization. We are also pleased to recognize our fourth annual Wayne Shackelford memorial scholarship winner who best exemplifies the most promising transportation student in the Georgia University System."

To read more about each winner, visit www.itsga.org/2013-award-winners.html 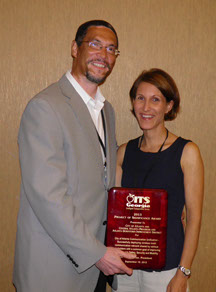 Project of Significance Award - City of Atlanta, Central Atlanta Progress and Atlanta Downtown Improvement District. A project, study, or program undertaken in the previous twelve (12) months with an impact that is quantifiable and directly related to a specific activity/action that reduces congestion, improves safety and security, and enhances mobility in Georgia.

The scope of this project included installation of a wireless mesh communication network to support the communication of the 110 traffic signals in the Atlanta downtown area to City’s Traffic Control Center (TCC). Once the project got on the way it was noticed by our team and other City staff that there were concurrent projects that were trying to establish similar type communication infrastructure between security camera assets and the City’s Video Integration Center (VIC). Our team initiated the dialogue and brought the various players to the table to determine an overarching set of requirements that met the needs of both projects. Over the course of few months, the ARCADIS team was able to bring all of players from the various offices of the City and help develop the requirements that met both project communication needs and be implemented within the existing budget and timeline of the initial traffic signal modernization projects. Upon completion of this phase of the project ARCADIS assisted the City with the additional requirement sets for providing power and network engineering to the camera nodes that were installed by others through Atlanta Police Department (APD) contracts. It was during this phase that APD and their integrator/contractor realized that the backbone for transmitting over 100 high video streams was not available and the project would not be realized prior to the promised date of the 2013 NCAA Final Four in Atlanta. ARCADIS was then tasked to help the City identify possible options for creating a backhaul that could support the current and future deployments. Working with Southern Telecom Inc. (STI) who owns a significant amount of conduits and fiber assets in the Atlanta area, ARCADIS developed a plan that utilized a ring of fiber and laterals purchased from STI to serves as the core that ties the existing City owned conduit banks, Georgia DOT owned fiber, City owned fiber, and numerous other key stakeholders in the area such as Georgia World Congress Center. The design was completed in less than 30 days and implemented in less than 3 months for APD to meet its go live date of March 31 2013 prior to 2013 NCAA Final Four. Additionally this led to further expansion in support of the Peachtree Road Race, in which the ARCADIS team installed 23 new CCTVs along the route and repaired and replaced 9 nodes within Piedmont Park. This resulted in repair and replacement of abandoned communication using fiber and wireless, along Peachtree, Spring, and 17th Street, as well as reestablishment of communication between Hubs E and F for City and Atlanta. What this project demonstrated is that given the drive to succeed and when public safety is at stake you can get a multitude of organizations that have not communicated or worked together in the past to come to the table and put their differences and priorities aside to achieve the overarching goal of serving our citizens and communities.