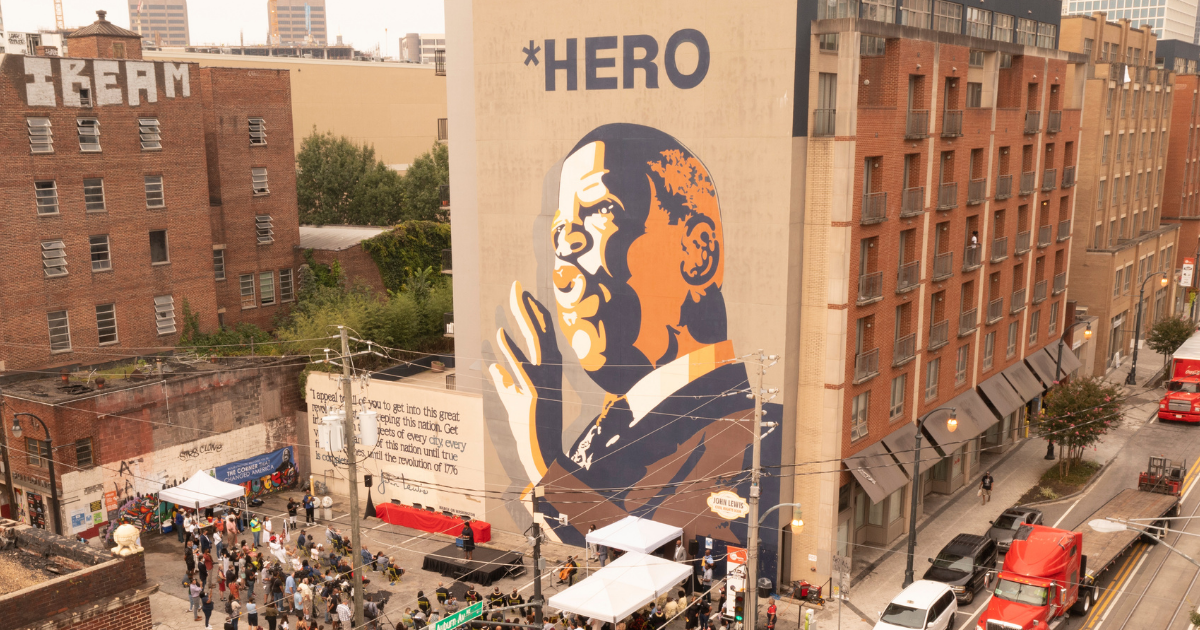 Congressman John Lewis dedicated his life to building "The Beloved Community” in Atlanta and beyond, and you don’t have to look far to see the lasting impact he made on our city. Keep reading for a list of places around Downtown Atlanta that were important to him, his work, and his legacy.

Congressman Lewis’ office was at 100 Peachtree, formerly known as The Equitable Building, for over 30 years. He loved the location because it placed him at the center of his congressional district and made him accessible to his constituents whether they came by car or MARTA; all means of transportation led to his office. He also loved that his office was within walking distance of Martin Luther King, Jr. National Historical Park and the National Center for Civil and Human Rights.

Congressman Lewis took great pleasure in walking around the neighborhood. Whether it was to his barber, a restaurant, the bank, or the post office, he used those walks to connect with folks, frequently asking strangers about their background, where they were from, and where they were going. He loved to converse with people, and his kindness and grace are remembered by all he touched.

Even after his passing, his legacy lives on across our country and in his neighborhood, as well as at 100 Peachtree. Congresswoman Nikema Williams, who holds Congressman Lewis’ 5th District Congressional seat, now occupies the Congressman’s old office, where she continues his work and builds her own legacy.

101 Jackson Street NE - Throughout its long history, Ebenezer Baptist Church, located Downtown has been a spiritual home to many citizens of the "Sweet Auburn" community. Congressman Lewis was a parishioner for years at the historic Ebenezer Baptist Church in Atlanta where the Rev. Martin Luther King Jr. preached and Warnock remains pastor. Warnock was called to Lewis’ bedside days before his death and presided over his funeral service.

55 Forsyth Street NW - “Congressman Lewis always made time for conversation. If you needed a moment to talk, he’d make that moment happen no matter how busy he was," says Clarence Hutchinson, manager of Vintage the Barbershop. "For nearly a decade, John would stroll over to our shop by himself, sometimes for a haircut but sometimes just to chat. He never said no to an autograph or picture, especially if there were children around, and he wouldn’t leave the shop until he shook everyone’s hand.

“John made a point to pay and tip the barbers, even after they told him he didn’t need to. He truly wanted to support our business. That’s just who John was; he was so genuine. He made sure he paid, he made sure he tipped, and he made sure to do the things that would enhance our community.”

265 Peachtree Street NE - Congressman Lewis was a frequent visitor and guest at the Hyatt over the years, and he had a yearly tradition of eating lunch at the hotel during DragonCon. He was also a regular attendee at the Hyatt’s Annual Heritage Celebration and was honored at the 2019 event.

91 Peachtree Street - Congressman Lewis was a frequent visitor to Woodruff Park. In 2017, hundreds of Atlantans flocked to the greenspace’s main lawn to experience a rare solar eclipse. Attendees were delighted by Congressman Lewis’ surprise appearance at the event, making the day even more festive and memorable.

Now that you've read a bit about the businesses that Congressman Lewis loved, mark your calendars for a very special event. The 2nd annual Reimagine the Legacy: Honoring Congressman John Lewis will take place on July 30th, 2022 at the HERO mural in Sweet Auburn.

This special ceremony and mural rededication encourage reflection, learning, celebration, and action, all centered around the life and legacy of Congressman John Lewis. All program activities are held in Downtown Atlanta and are open to the public. Join us for this special day beginning at 10 a.m. as we honor and celebrate the congressman. RSVP here.