The Return of the Broad Street Boardwalk 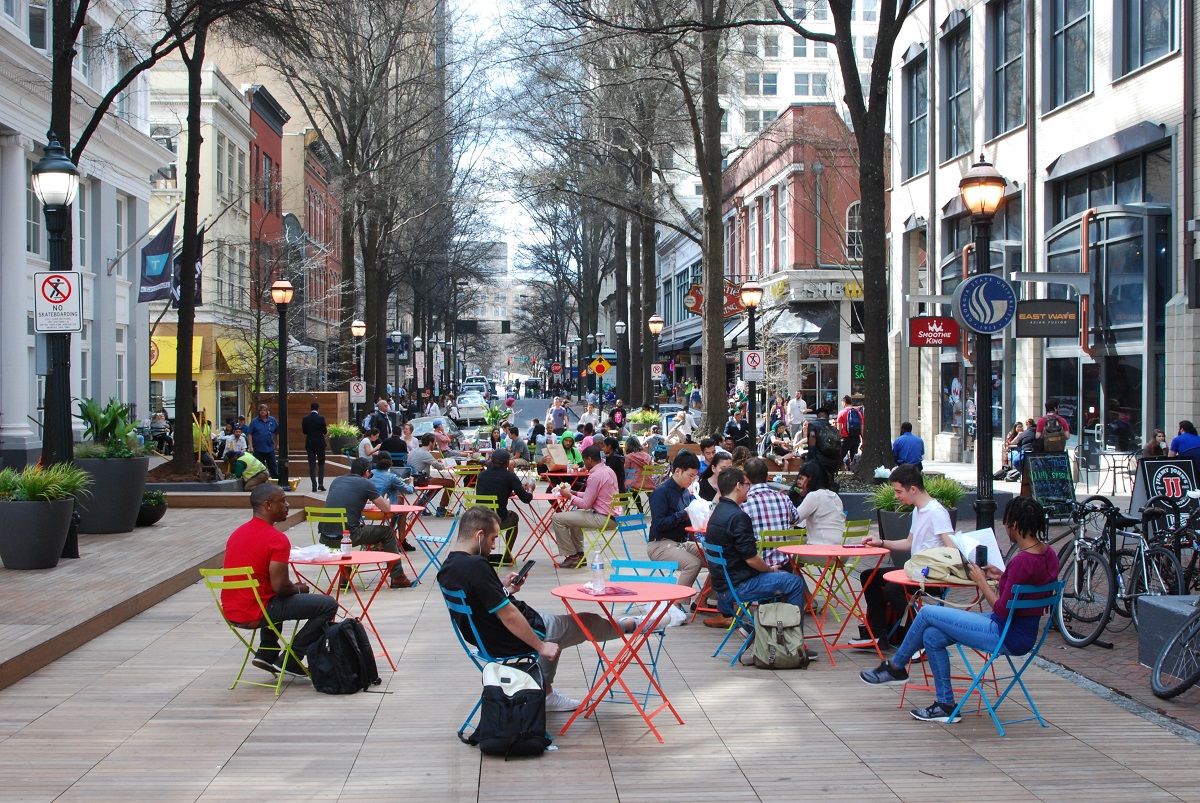 The Broad Street Boardwalk Lunchtime Concert Series will take place from 11:30 a.m. to 1:30 p.m. every Wednesday in September and will feature several local musicians who will entertain attendees with their soulful performances.

Nestled between the car-centric streets of Downtown Atlanta, you’ll soon see the return of a popular pedestrian-oriented oasis. The Broad Street Boardwalk, which closed at the start of the pandemic, is set to reopen this month with a weekly Lunchtime Concert Series beginning September 7th.

The Broad Street Boardwalk, first unveiled in 2018, is located west of Woodruff Park at the Luckie Street intersection. Its historic storefronts are a charming reminder of Atlanta’s past and offer a variety of fare from Italian and Greek to bubble tea and vegan ice cream. Beyond its many restaurants, the Boardwalk gives Downtown residents, students, and employees alike a much-needed space where they can gather and relax under the refreshing shade of the tree-lined street. The new, renovated space includes structural support improvements as well as integrated seating and lighting, making it more attractive than ever.

A joint initiative between the Atlanta Downtown Improvement District (ADID) and the Department of City Planning, The Boardwalk Lunchtime Concert Series will take place from 11:30 a.m. to 1:30 p.m. every Wednesday in September and will feature several local musicians who will entertain attendees with their soulful performances. The musicians are:

Everyone in the Downtown community is invited to take a break, grab some food at nearby eateries, and enjoy this vibrant public space. And get this: concert attendees who purchase lunch from one of the many nearby restaurants can receive a free Mocha Pop!

The public is also invited to the Boardwalk’s Reopening Ceremony on Thursday, October 6th, from 5:00 p.m. to 6:30 p.m. The event will include the dedication of a brand-new crosswalk mural by artist Charity Hamidullah and a special performance by keyboardist Mausiki Scales, founder of the critically acclaimed ensemble Common Ground Collective and a recipient of the  Georgia Governor’s Award for the Arts and Humanities. Attendees will also receive complimentary popsicles from Mocha Pops.

The Broad Street Boardwalk is one of the many ongoing initiatives led by Central Atlanta Progress and the Atlanta Downtown Improvement District. Together with our partners at Purpose Possible, we are also developing a placemaking and activation strategy to guide investments that foster Downtown’s overall vibrancy. Atlantans are invited to submit their feedback on what they’d like to see in the community. One lucky survey respondent will even win a $50 gift card to use at their favorite Downtown restaurant. Click here to complete the survey.

As we emerge from the pandemic, the nature of how we use our Downtown is changing. With that, we have the unique opportunity to create a more people-oriented city center. Hopefully, the Broad Street Boardwalk will only be the first of many projects that put the focus on what makes Atlanta the city we love: the people.