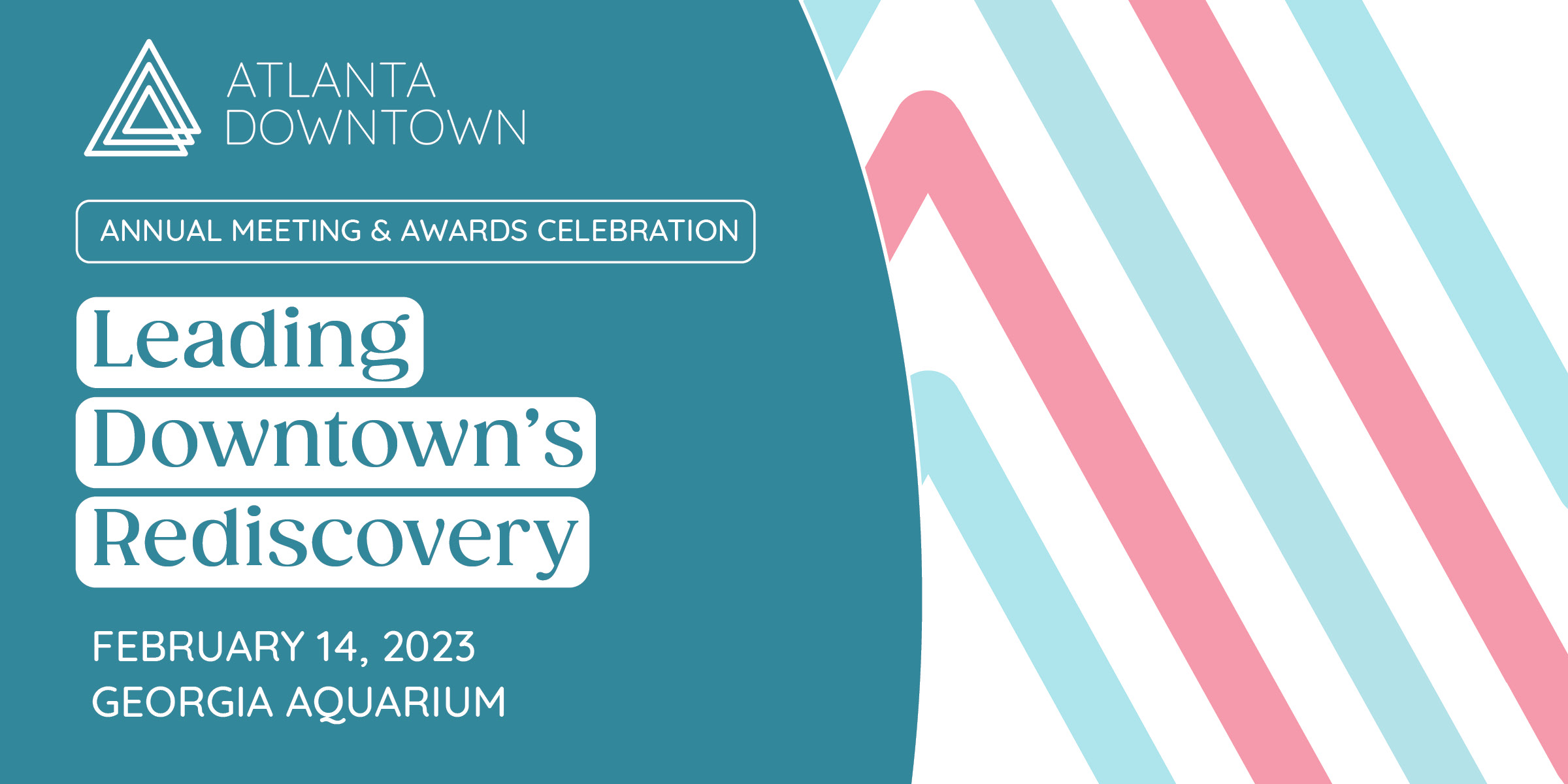 Alongside nearly 700 of your neighbors, colleagues, and fellow Downtown enthusiasts, celebrate the highlights of 2022 with us before we turn an eye toward all that 2023 holds for our organization and our community.

The Annual Meeting & Awards Celebration is CAP/ADID’s flagship event honoring the people, places, and businesses shaping Downtown’s exciting growth and serving as the stage for presenting three prestigious awards. There’s no better opportunity to influence and inspire new clients, network with business associates, meet new contacts, and stay informed on what’s happening in the heart of the city.

Join us on Tuesday, February 14 at the Georgia Aquarium. The event begins with check-in and networking at 11:00 a.m., followed by the program from 11:45 a.m. - 1:15 p.m. Each ticket includes admission and a plated lunch. We look forward to seeing you there!

Register for the 2023 Annual Meeting

Each year, Central Atlanta Progress (CAP) and the Atlanta Downtown Improvement District (ADID) give three prestigious awards to leaders who have had an impact on Downtown Atlanta in many ways.

Dan & Tally Sweat Award: Designed to honor former CAP President Dan Sweat’s legacy and accomplishments, this award was renamed in 2020 to also acknowledge the accomplishments of Tally Sweat, and is given to those who have become quiet, effective leaders beyond the scope of their positions in the community. Each year, CAP selects an individual who, like the Sweats, demonstrates true leadership and advocates for “doing the right thing” for Downtown.

Arthur Blank is co-founder of The Home Depot, owner of the Atlanta Falcons, Atlanta United FC, and PGA Tour Superstores, and head of the Arthur M. Blank Family Foundation. Yet Blank’s influence goes beyond these already large, recognizable organizations; through the AMB Family Foundation, Blank has also made his name synonymous with giving and bettering his community. Among these include significant support for the National Center for Civil and Human Rights, establishing the Arthur Blank Family YMCA, and generous donations to the Westside Future Fund and Children’s Healthcare of Atlanta.

Warner Bros. Discovery Community Leadership Award: This award, established in 2003, was designed to recognize those in our community who, as individual private citizens, step forward and do good work on Downtown's behalf.  Recipients of this award rarely ever show up on the normal radar screen in the corporate and organizational leadership world.

Sally Flocks founded the volunteer-run nonprofit Pedestrians Educating Drivers on Safety (PEDS) in 1996. The scope of PEDS quickly expanded from simply educating drivers to going to the source of many of the issues: the way the roads are built. It was not only drivers needing education, but also a larger category of city planners and engineers.  Flocks became what she calls “a self-trained engineer or planner,” organizing training workshops for transportation professionals through PEDS.

The Russell Innovation Center for Entrepreneurs (RICE) is a business generator organization, focusing on providing Black-owned businesses with the support to succeed and grow. In their new facility, RICE offers meeting, office, and innovation spaces, as well as opportunities for education, networking, and mentoring. Their goal is to develop Black entrepreneurs and create a strong, supportive business community anchored in Downtown.

Ambassador of the Year: Rozlyn Smith

To learn more about sponsorship opportunities, contact Wilma Sothern, Vice President of Marketing, at 404.658.5910 or wilmas@atlantadowntown.com.