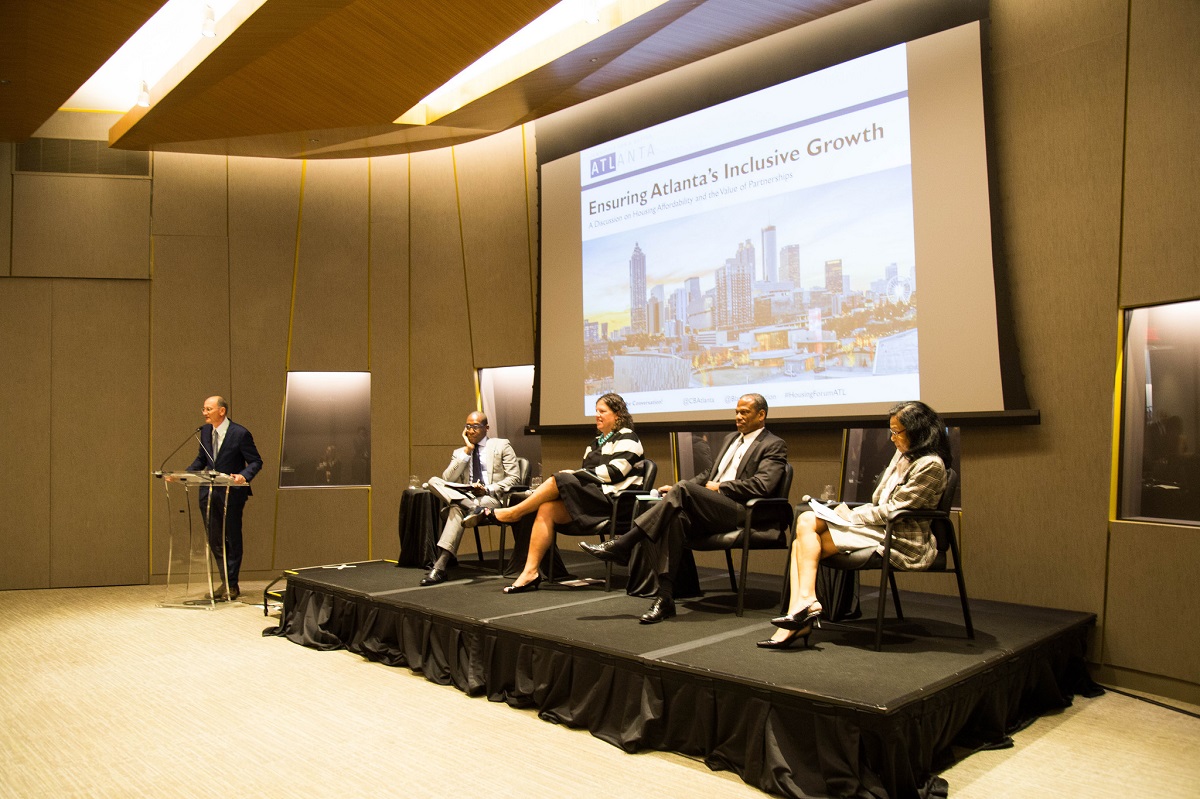 For over 75 years, Central Atlanta Progress has played an integral part in helping the city not only find its identity, but become a modern standard-bearer for the New South.

CAP continues to work behind the scenes to integrate ideas, build partnerships, and coordinate efforts to improve the center city, reaffirming the organization’s leadership role in the community and region.

Here is a snapshot of some of the efforts CAP has led the charge on, from commissioned studies and focused advocacy to creating and incubating nonprofit organizations.

The City of Atlanta’s resident population is projected to nearly triple in the next 25 years, and CAP is invested in ensuring that Downtown—a key area for absorbing that growth—is prepared. With optimal transit access, a strong employer base and substantial real estate investment, it’s time to focus on how people travel to and through Downtown. The last part of the puzzle is shifting travel behavior to optimize the use of existing infrastructure through the adoption policy and regulations. Learn more about the City of Atlanta Transportation Demand Management (TDM) Strategy developed in partnership with Midtown Alliance and Livable Buckhead and with funding from the Atlanta Regional Commission.

CAP is one of the major conveners of HouseATL, a cross-sector group of civic leaders committed to building the political and community will for a comprehensive and coordinated housing affordability action plan in the City of Atlanta. Participating partners have defined the problems, identified the barriers to success, taken a data-driven approach, and engaged in thoughtful problem-solving so that civic and business leadership in the City of Atlanta will have a shared, comprehensive set of policies and adequate funding to address housing affordability.

CAP commissioned a series of research studies to understand the impact of a gaming attraction to the State of Georgia as well as local communities, with emphasis on urban cores. The research studies focused on four key areas, including state-level impacts of casino gaming, social and economic impacts to local host communities, as well as impact on real estate development surrounding a casino. View the full study here.

In 2015, stakeholders created and funded a full-time planning position for the Memorial Drive Corridor from Downtown to East Lake. Central Atlanta Progress agreed to host the Corridor Executive position because it has a shared interest in quality redevelopment of Memorial Drive and experience with incubating similar organizations. From 2015-2019, the Corridor Executive role was essential to guiding more than $1.5 billion in private development and tens of millions of dollars in public infrastructure to make the Corridor safer and more walkable for the future.

In 2013, CAP supported the creation of Sweet Auburn Works, an organization intended to implement preservation-based economic development efforts and preserve, revitalize, and promote the commercial and cultural legacy of the Sweet Auburn Historic District. Learn more about the organization at SweetAuburnWorks.com.

Originally incubated by CAP, GeorgiaForward’s mission is to improve the state of Georgia by working as a catalyst to promote cross-sector, statewide conversations and partnerships by engaging young professionals and business, political, academic, and civic leaders. The organization’s signature programs are Young Gamechangers and the annual Forum. Learn more at GeorgiaForward.org.

Learn more about our history of community leadership here.