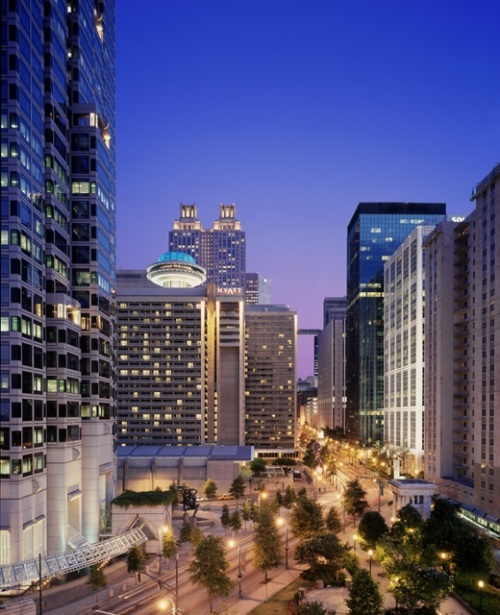 To learn more about Downtown's growth during this timeframe and the resulting built environment, download Modern Downtown Atlanta, an easy-to-read, well-illustrated booklet that documents the history of Atlanta as it was booming into the economic powerhouse it is today. Modern Downtown Atlanta was written by Patrick Sullivan and Dr. Karcheik Sims-Alvarado and designed by New South Associates, Inc.

Downtown Atlanta underwent unprecedented development during the mid-twentieth century. While it can be assumed that this development was the result of a variety of factors and influences, it was necessary to precisely define and establish the associated historic context as extant resources constructed during this period become potentially eligible for the National Register of Historic Places (NRHP). To begin this process, the first survey of mid-twentieth century and Modern resources was completed in 2013. Downtown Atlanta: Contemporary Historic Resources Survey Report documented remaining Downtown buildings and structures constructed between 1935 and 1985.

The survey report formed the basis of a subsequent Phase One NRHP Multiple Property Listing Form, which was instrumental to the official inclusion of the Peachtree Center District on the National Register of Historic Places in 2018.

This Downtown Contemporary Historic Resources Survey has been financed in part with Federal funds from the National Park Service, U.S. Department of the Interior through the Historic Preservation Division of the Georgia Department of Natural Resources. However, the contents and opinions do not necessarily reflect the view or policies of the Department of the Interior of the Georgia Department of Natural Resources, nor does the mention of trade names, commercial products, or consultants constitute endorsement or recommendation by these agencies. This program received Federal financial assistance for the identification and protection of historic properties. Under Title VI of the Civil Rights Act of 1964, Section 504 of the Rehabilitation Act of 1973, and the Age Discrimination Act of 1975, as amended, the U.S. Department of the Interior prohibits discrimination on the basis of race, color, national origin, age, gender, or disability in its federally-assisted programs. If you believe you have been discriminated against in any program, activity, or facility as described above, or if you desire further information, please write to: Office for Equal Opportunity, National Park Service, 1849 C Street, N.W., Washington, D.C., 20240.